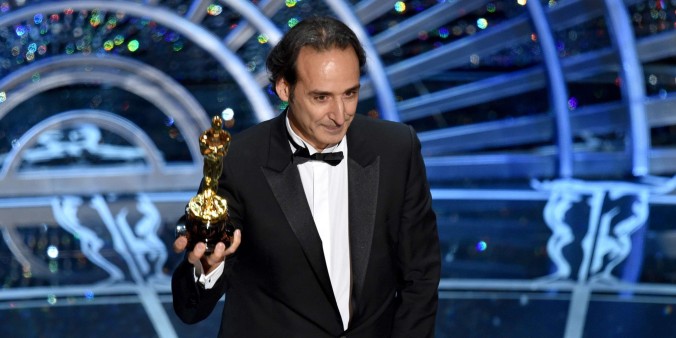 It is with great relief that I can finally say that gone are the days when I attempt to talk about film scores and someone mentions the name Hans Zimmer. It used to be that upon asking someone who their favourite composer was I would often hear Zimmer’s name in response. He may be one of the most popular film composers and a name that everyone is familiar with, which is perfectly understandable as he is a very talented man with an incredibly impressive body of work. However, we are living in time when other film composers are biting back against this and making their mark, putting their flag firmly in the ground and showing that they are a force to be reckoned with. I love Hans Zimmer and the work he produces, but he has healthy competition in his field, and it is beautiful.

Pictured above is the composer Alexandre Desplat, taken this year upon receiving the Academy Award for Best Original Score for his work on Wes Anderson’s The Grand Budapest Hotel, a terrific film with an outstanding score. I remember so clearly walking out of the cinema after seeing the film last March and purchasing some of the tracks from the score when I got home because they were just so utterly brilliant. Incidentally however Desplat received a double nomination this year, one for the film previously mentioned and one for his score produced for The Imitation Game. As much as I loved his work for The Grand Budapest Hotel, personally I feel that Desplat deserved the award for his work on The Imitation Game. The Grand Budapest Hotel’s score was very upbeat and jolly and suited the theatricality and style of the film perfectly, but for me the score for The Imitation Game carried more emotional weight. The scenes in which we see Alan Turing running through fields, or running from building to building once he has made a breakthrough with his work are accompanied beautifully by such powerful music that really adds to the cinematic experience. The one scene in particular that stands out for me is the scene in which Turing and the other minds that worked at Bletchley Park are burning their work in a huge fire, with focus on sheets of paper floating in the breeze and the flames rising higher, the music of the scene was just utterly sensational and it is a genuinely moving moment of cinema.

I have to say it was fantastic to see Desplat winning the award this year, having been a fan of his for a number of years now I am fully aware that his body of work speaks for itself and he does not need an Academy Award to show how talented he is. However it was wonderful to see him take to the stage and have an entire building of people applauding him and celebrating his talent in such a manner. He is honestly one of the greatest film composers this generation has seen, having been a short running collaborator with Wes Anderson on Fantastic Mr Fox which I liked very much and Moonrise Kingdom which again he did wonderful work for. Aside from that he has worked on other large projects such as the recent Godzilla film, The King’s Speech and Argo, all of which were fantastic films with Desplat composing beautiful unique music to accompany them. The man is an unprecedented genius and I cannot wait to see what work he will produce next.

I’m aware some readers may not be familiar with his work, so if I was to name the films most people will have seen that allowed them to experience his work I would draw your attention to the final two Harry Potter films. In particular I would draw your attention to the first track on The Deathly Hallows Part One score entitled ‘Obliviate’, one of my favourite songs composed by Desplat. It manages to capture perfectly this idea that the story is reaching its darkest point and the characters are no longer children, they are facing death directly in the face and it is thanks to Desplat that the opening to the film is so weighted and dark.

While still vaguely on the topic of the Academy Awards I feel I should briefly return to Hans Zimmer for just a moment. As many will know he received a nomination this year for his score composed for Christopher Nolan’s Interstellar. He was tipped very heavily to win, but, and I am not alone when I say this, it was not his year. The score for Interstellar was good and it does hold some fantastic tracks such as ‘Mountains’, ‘Imperfect Lock’ and ‘S.T.A.Y’, however it was clearly not consistent enough to win. It was a score that was too loud in places and did feel somewhat out of place. The thing about Interstellar is that it is a film that contains shots that are accompanied best by silence. Seeing such a tiny spacecraft travelling through the vast infinite parameters of space is more haunting in silence as it makes you contemplate just how small mankind is in our universe. Zimmer has produced some fantastic work in the past and has unfortunately had more questionable work such as the much unwanted big screen adaptation of Dan Brown’s tedious work The Da Vinci Code and Angels & Demons, both of which are ludicrously bad. So I do not have a problem with Zimmer, I have a lot of respect for him and his work, but people of my generation are finally realising he has healthy competition consisting of equals and indeed betters.

Obviously in any year of cinema only one person can win the Academy Award for Original Score but it is interesting to see those nominated. Usually it is a category that manages to capture some of the best talents of the year. However they do on occasion completely overlook certain individuals. For example one of the biggest disappoints this year was seeing that Antonio Sanchez was completely overlooked for his work on Birdman, a fantastic score consisting of haunting short tracks with only a drum kit playing pieces that mirror the twisted mind set of Riggan Thompson as he descends deeper and deeper out of contact with reality and into the mind of his onscreen alter ego, as his lust for fame consumes him. The score works perfectly with director Alejandro González Iñárritu­­­­’s vision of the film being one continuous shot. It is the perfect accompaniment for cinematographer Emmanuel Lubezki’s work as the score guides us through the labyrinthian set of the theatre, twisting around corners and from floor to floor, through doorways, out onto the streets, it was just outstanding. The rhythmic structure of the score mirroring footsteps or elevated heartbeats or just the nonsensical noise of the character’s madness was something that was captured brilliantly by Sanchez as a first time composer and it was a real shame to see him overlooked, but still an absolute pleasure to appreciate his wonderful work.

Whilst on the topic of composers who are overlooked one cannot possibly fail to mention Jonny Greenwood. He was overlooked by the Academy shockingly back in 2008 for his work on Paul Thomas Anderson’s There Will Be Blood and has again been overlooked this year for another Paul Thomas Anderson film, Inherent Vice. Greenwood is an exceptional talent and his work for cinema has been genuinely fantastic. There Will Be Blood’s score was of course some of his finest work as he manages to delve into the mindset of Daniel Plainview and follow him on his journey from loneliness, to success, then onto greed and eventual madness. His scores often feel like they are part of the individual characters which works perfectly with PTA’s film as they are very heavy on character and substance. Greenwood has unfortunately been overlooked consistently, however he is a talent that does not need to step onto that stage to collect a golden statuette; his work speaks volumes that the Academy will never be able to comprehend.

It is difficult for me to talk about music composed for films in terms of favourites because I have so many composers that I hold close to me. I think if I absolutely had to pick one favourite, it is a tough choice, but ultimately I would have to say Howard Shore. Not only has he produced beautifully indescribable work for the Lord of the Rings films but he is also a long-time collaborator with David Cronenberg, one of my all-time favourite film makers. This means he has composed wonderful scores for films such as The Fly and A History of Violence, the recent Cronenberg hit Maps to the Stars, and even less known films like Cronenberg’s 1996 masterpiece Crash that has such a haunting score that really lingers in the brain and resonates in a way that makes you feel so uncomfortable, but in a really good way. For me his body of work is unparalleled and when he collaborates with the City of Prague Philharmonic Orchestra it is enough to knock someone as dogmatic as me into a state of stunned silence, as the beauty of the music just completely takes over and obstructs my capacity to verbalise efficiently. He is a wonderful man and stands in my mind and one of the greatest talents of cinema.

One final note on this topic that I feel has to be mentioned, it would unforgivable for me to discuss film composers that are writing their names as the greats without mentioning what was one of the best film scores of last year, the phenomenal first time composer of the score for Under the Skin, Mica Levi. The Academy completely overlooked her work, but this was expected. This does not undermine the fact that ­­Levi composed one of the best scores I have heard for a very long time, a chilling mixture of sounds that really crawls underneath your skin and feels like it’s trying to turn you inside out. Often it is hard to distinguish between the score and sound effects of the film because they merge together at points to sound like clunking machines or noises from technology and beings that are not of this world. It was one of the most bizarre and non-conventional scores that really works to contort the mind and bend your brain into a new position and relocate it elsewhere in the body, but this is an utterly fantastic experience. A dark science fiction film that explores what it means to be human and the destruction of the human body, accompanied by a score that scrambles your mind. Mica Levi is undoubtedly a talented composer and this was an unbelievable breakthrough, I honestly cannot wait to see what she produces next.

The main point I am trying to make here is that while making film composers competitive is silly because they are all so unique, it is oddly functional. It allows us to see just how many talents there are working in cinema at the moment. It presents brilliant ground for discussion as we are given the opportunity to look at numerous composers and examine their work in more detail. I do not feel that the competitive nature of the awards is functional in terms of looking for a winner, but it is healthy because it allows us to talk about the big names we all celebrate and the up and coming names such as Antonio Sanchez, thus strengthening our value of important fragments that build our culture.

And then there are wrecking balls such as Mica Levi. Composers that turn things on their head, transcend our expectations and give us an experience that cannot possibly be replicated.

Mica Levi is the type of composer that really says

“audiences watch this space, and Hollywood, watch your back”