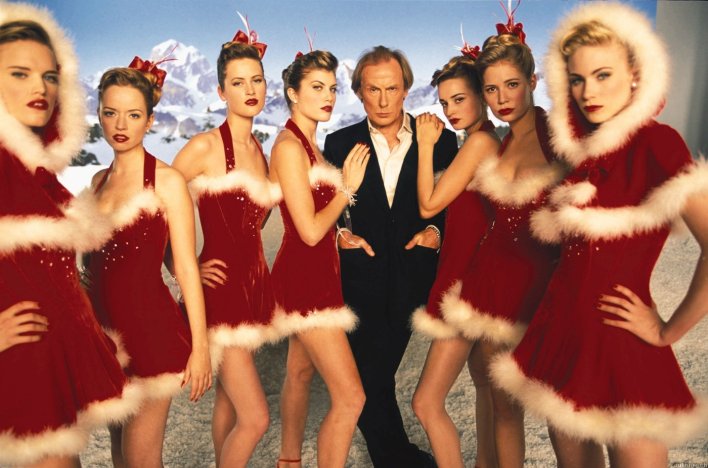 Christmas is rapidly approaching, so it’s time to talk about what is arguably one of the most popular christmas films of the modern age.

December is now racing by, my advent calendar is moving in to that stage now when it looks like it’s had a break in, so I thought it the best time to talk about Christmas films. I sat down and watched It’s a Wonderful Life yesterday which has already made me want to run out in to the streets in a Jimmy Stewart fashion and shout joyous greetings at strangers. But alas until I am prime minister or supreme overlord I shall have to restrict my happiness to the borders of my bedroom.

Another film I’ve already managed to watch is one that it is essentially one of the best modern christmas films, and that’s Richard Curtis’ much loved comedy Love Actually starring just about every big British actor you can think of. And Hugh Grant.

Now there’s a common misconception that men do not like this film. It’s an assumption that women of all ages make when the topic of this film comes up, and they believe that men generally hate this film, which I’m afraid just isn’t true. I have a lot of friends that are guys and they all talk about this film and talk about how funny it is. I myself have even said on numerous occasions that I really like romantic comedies if they are written well, which I believe this film is. I think it’s a film that has a lot of heart at this time of year and is an uplifting experience every time I watch it.

It’s not a film that is meant to be taken too seriously, so it’s not meant to be over analysed and it’s not necessarily one that people will go in to depth with over the cinematography. It’s just a bit of fun that is written to make the audience laugh and to make them smile at the end. It is very reminiscent of ancient Greek theatre in which the comedic plays weren’t meant to be anywhere near as complex or deep as the dramatic pieces, they were purely meant to be absurd pieces of surreal theatre that had a happy ending. That is exactly what you have with Love Actually, it’s a bit of fun that’s meant to make us laugh at a time of the year that is commonly associated with being happy. If you really want to go in to detail over it and over analyse it then the film isn’t for you. I know some people want to analyse every bit of detail for every film, which is fine if you’re watching something like 12 Years A Slave but it just plain stupidity with something like this. If you didn’t like it because you took it too seriously then you need to lighten up a bit a stop being so bloody boring.

It’s great to see a film talk about love as a broad topic. The problem with most modern rom coms is that they focus on just on couple, or one type of person, which is exactly what this film avoids. What Curtis shows with this film is that love is something that can happen to absolutely anybody in absolutely any possible way. So instead of just having a young american couple like a lot of films do, you’ve got an all manner of different scenarios in which people are falling in love, from Andrew Lincoln falling in love with his friend’s new wife, to Joanna Page and Martin Freeman falling in love whilst filming as nude doubles for other actors. It is such a broad look at love that even covers age which is quite interesting to see, in particular the character played fantastically by a young Thomas Brodie-Sangster which is that of a child going through their first experience of love, but who speaks like a jaded heartbroken writer.

The narrative structure is quite clever also, with several threads that all come together, be it straight away or right at the last minute, but it’s good to see a film at christmas that promotes this idea of community. I understand this time of year means different things to different people but one of the key things I think you’ll find among most is that it is a time to spend with the people that mean the most to you. That is exactly what this film promotes, showing couples (obviously), friends, siblings, extended family, reconstituted families and a whole other bunch of relationships so it gives the film a warm feeling. It makes you think about how much people mean to you and just how lucky you are to have people around you at Christmas time so in that respect it is a film with a lot of heart.

I have always admired Richard Curtis as a writer because not only is he a very clever man, but also he is extremely talented at forming such fantastic characters. He is good at observing things that happen in real life and then putting them to screen in a comical style. For example one of my favourite characters in the film is that of Rowan Atkinson as the sales advisor, which although it is a small role it is one that shows some of the best observational comedy you will ever see. It’s not only subversively mocking shop attendants but also it is quite clearly mocking the high end jewelry stores that have such a focus on being pompous and excessive. And the of course who can forget his depiction of the British Prime Minister? He takes a figure we all see as being boring and rigid and very much work based, and then shows them dancing around number ten to Jump by the Pointer Sisters. It is one of those moments in film that never ceases to make me laugh every time I watch it, just because of the absurdity of the whole situation.

The subversive comedy doesn’t just stop there though, it seems as though Curtis uses a lot of different topics to provide a satirical approach to the modern age. As discussed before there is obviously the jokes based on both British and American politics, then there’s the mocking of how British people act to Christmas shopping but one of my favourite characters is Bill Nighy as the jaded pop star who makes a bloody awful christmas single. He is an over the top wanker who is incredibly unlikable but he is one of the finer comical points of the film. He represents just how stupid the music industry gets around christmas time, with people selling themselves out just to be number one, the same song being played over and over so it is nice to see Curtis and Nighy openly mocking this. Also the side of his character that openly talks about sex and drugs is a perfect mockery of several famous musicians which adds to the comical value.

I think as a nation we do like this film quite a lot because of how unashamedly British it is. It is a film that celebrates Britain as a nation by parading some of our finest actors throughout and by celebrating humour that we all love. And it’s not just the scene where the Prime Minister verbally destroys the President that make you feel proud to be British, it’s all of the moments that show just what British people are like. One of the best scenes for this is when Joanna Page and Martin Freeman are the nude doubles, so they are completely naked in front of each other and in an all manner of sexual positions, and yet they’re talking about how bad the traffic was. It’s awkward and stale humour but it’s the sort of thing a British person would do and so I think the film for us as a nation is relatable.

My only problem with the film is that I’m a fan of more realistic romance films where there isn’t necessarily a happy ending. Films like Submarine and Annie Hall where the unhappy ending is shown to be the result of the main character fucking up so many times seem more realistic to me and more relatable. Particularly in this film it is the scenes of upset that I think are more human because they how love can be used as a weapon as well as a medicine for healing. In particular the thread of the narrative that hits me the most is that of Emma Thompson’s and her troubles with her husband. As upsetting as it is to see her go through that and be stuck with such a nasty prick is is the sequence that seems more realistic than all of the happiness at the end. But I understand at this time of year we need happy endings to keep spirits up, and I’m not sure the film would have the same impact if it ended with masses of heartbreak, divorce and death so I am willing to let the glossy Hollywood ending win on this occasion.

So I probably will watch the film again over the christmas period, it is a bit of fun for this time of year and allows my inner film nerd to kick back and relax for a bit without over thinking so much. It’s also a time to watch some classic films that tv channels like to play at this time, most notably Mary Poppins and Chitty Chitty Bang Bang so this can be a good time of year for films.

Until the next time I shall leave you with one of my favourite quotes from the film: