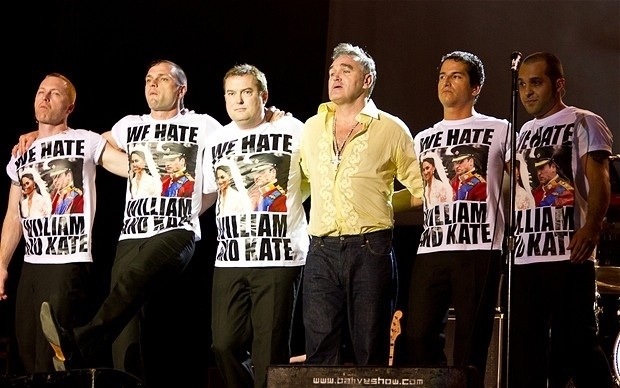 There’s a word we like to throw around a lot in Britain: patriotic. Whenever something happens that means the media attention of the planet is focused on our little nation, you’ll find that word being thrown around a lot more than usual. You’ll turn on a news station and find an interview with a random man outside a pub saying “oh yeah it’s just a great time to be British, make you feel really patriotic you know?”. I do know, however I do not share this level optimism.

Now I know the title of this post suggests that there’s going to be a big political debate in which I’m going to rant about the Royal Family, however this is far from the truth. I’m aware that a small blog online, written by a bored young adult is far from the appropriate place to discuss such matters. It would be inappropriate to open up such a large debate on such a small scale. Plus only about six people would see it. Seven maximum.

What instead the title references is my growing hatred for the media’s approach to affairs concerning the Royal Family. We’ve now suddenly slipped in to this culture where we have to know everything that a member of the Royal Family does. Every time one of them takes a step in public we suddenly have a twelve page spread in every newspaper, with a separate pull out magazine consisting of sixty six pages of photographs. When did this start happening?

I’m pretty sure the majority of us would be fine if we didn’t know at least half of the rubbish we’re bombarded with. We would all get on with our lives, as long as we know the basics of what’s happening I’m sure we can still function as human beings. I’m not entirely sure if I can speak for everyone else, but I know I would be fine if I missed a news story discussing what type of dress Kate Middleton was wearing when she last appeared in public.

I don’t blame the Royal Family for this of course because it isn’t really their fault, the real people to blame here are the public. We’ve been sucked in to this celebrity culture where we’re supposed to care about the smallest little thing that happens in a celebrity’s life, like if they’ve moved up a dress size, or what their relationship status is or whatever nonsense I don’t care about. With people like Katie Price it’s more acceptable because we would expect her attention seeking nature to warrant the appearance on the front of closer magazine every week, but with the Royal Family it’s excessive.
There was an example of this about two weeks ago, I was sat with the 24/7 BBC news channel on, and on the tickertape at the bottom there was a headline that said “BREAKING NEWS: Buckingham Palace can confirm that the Duke of Edinburgh has had minor surgery on his hand”. Seriously? With everything else that’s happening in the world surely they could have found something more poignant to talk about. I don’t understand why they feel as though this is big news, it’s not as is if the surgery was lifesaving or even noteworthy. With more pressing issues occurring at the moment I can’t even begin to comprehend why this was chosen as important news.

It happens all the time though, and we just have to deal with it. As soon as an event happens that has the adjective “royal” slapped at the front of it, we have to stop everything, take the day off work and take to the television screens to observe whatever is being deemed important. The most tedious of which is when the word is placed in front of “visit”. That’s right, news stations divert their attention to a member of the Royal family visiting somewhere in England for a couple of hours whilst talking to people that neither they nor we have any real interest in. It just shows how much the idea of the Royal Family has changed over time. We’ve gone from having kings who would lead the country in to battle on a horse, to a Royal Family who visits a youth community centre in Hamphshire, to try some brownies that children have made, shake hands with people and then go home again. Inspiring.

But that’s the position we’re now in, members of the Royal Family don’t even have to do anything and yet the press will swarm. A lot of the time it involves the press standing outside a building without having seen any members of the Royal Family. For example, on the day of the wedding (it was a wedding) people piled outside Kate Middleton’s house and stood there for the majority of the day. I’m not sure anyone told them that she wasn’t in at that point and probably wouldn’t be all day. It was ridiculous, it just shows how obsessed people are that they will literally stand outside the house of someone famous on the day of a special occasion. A whole day wasted, stood outside someone’s house, it’s absurd.

The same thing happened when the whole baby thing kicked off last year. When young Catherine was rushed in to the hospital, the building was surrounded by members of the press who stood there for hours on end waiting for something to happen. Sound a bit boring really when you think about it.
And even that event was ludicrous, firstly because of the newspapers making a massive fuss about William being photographed wearing trainers on the way to the hospital. I’m sorry but that is not a news story, someone wearing shoes is not a story that deserves to be in the front of a newspaper. I think he should be able to turn up in whatever clothing he wants. He could have turned up wearing a Hawaiian shirt, purple tights and a Peter Pan hat whilst riding a unicycle and whistling Bohemian Rhapsody, the baby still would have been born.

Secondly because there were polls being taken with people guessing what the baby would be. I don’t’ think it could have been that exciting considering the fact that there’s only two possible options so the fun was taken out of it from the very beginning, if you can even call it fun. And then after that the even more interesting game of guess the name began, which is a game we don’t even like doing with our close friends let alone with people we’ve never even met. The news stations were taken over with interviews of people in the middle of a shopping centre saying things like “I think they should call it Malcolm because my dad’s best friend’s brother knows a person called Malcolm and he’s got a face, a face with skin, it’s a brilliant name!” as if the members of the Royal Family were watching these bumbling idiots and taking notes for that most vital of decisions.

I just get sick and tired of the media sometimes, and when I say the media I mean the public. They can’t get enough of this rubbish. They love it when Kate Middleton is photographed walking in to a building, they think it’s history in the making, which only passes on the belief that this is important, which I’m sorry to say this but it isn’t.

It angered me to see the tabloids insulting Kate Middleton because she didn’t instantly lose her baby weight and return to a dress size they deem acceptable. Our culture is so obsesses with sickening figures such as Kate Moss and Victoria Beckham who thrive off of being stick thin, and it makes us believe that this is genuinely important when it clearly isn’t. If Kate is slightly larger than usual because she’s just had a child then just accept that. It’s a natural part of life and so shouldn’t be mocked.

I can’t help but feel it’s only going to get worse from here. Women will be expected to be stick thin whilst actually pregnant and should expect ridicule if they’re anything above a size zero seven months down the line. We’ll have people like Katie Price having babies forcibly removed and grown in petri dishes rather than being inside them and making their figure look bad.

Getting back to my original point (apologises for the tangent there) the situation with the Royal Family is going to get worse as well I’m afraid. That word “royal” will be slapped in front of as many things as possible until the public are hanging on to hear news reports detailing the latest “royal oxygen intake” or “royal blink”. People weeping in the corner on the verge of a mental breakdown because they haven’t had their latest scoop about what shade of blue baby George is being dressed in. Entire weeks being taken off work because the latest “Royal hair cut” was better than ever before and now Kate Middleton looks as though she was hand carved by Zeus himself. And then people taking to the streets in a state of euphoria because the latest “royal handshake” was executed successfully and with minimal delay. This is what we’re causing, as people we are building this nation on the idea that every single event concerning the monarchy matters. It’s not that I don’t appreciate all that they do, I just don’t feel like we need to know every single about them at every point in time.

Have you ever had that experience of having a family member come to visit who you haven’t seen for a long time, and they begin to tell you every single detail of what’s happened to them and every one they know from the year 1986 right up until they sat down on your sofa and requested two sugars in their tea? That’s what this is, but on a national scale. And in both scenarios, I do not care.